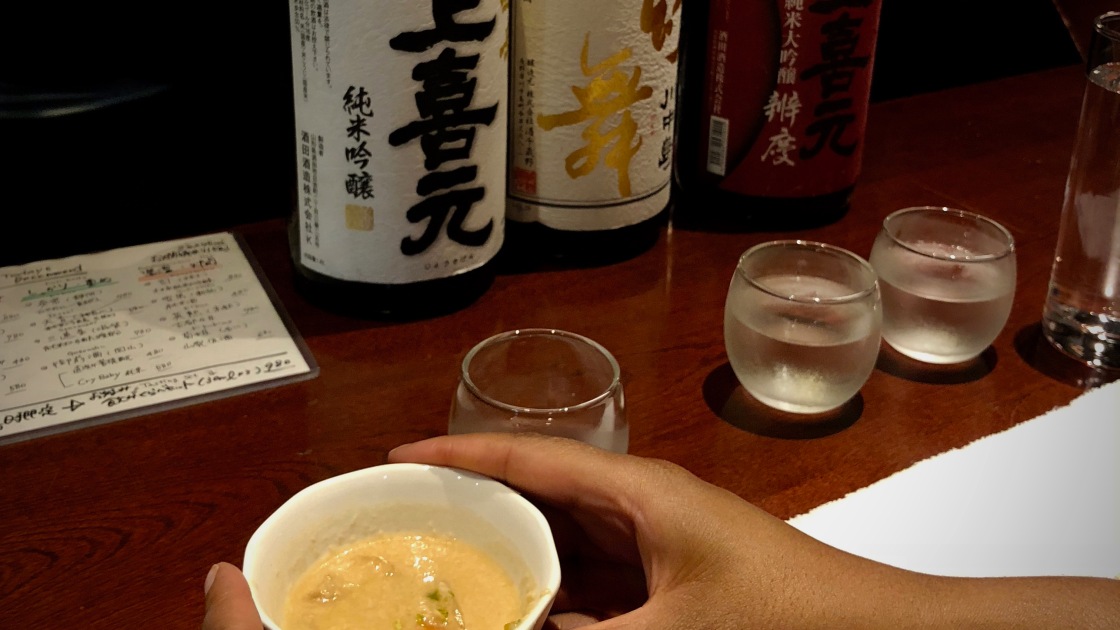 The sidewalks of Shinjuku glisten in the lightly insistent rain. We’re on the side of a major road, rain jackets zipped and hoods over our heads, huddling under an umbrella that shakes in the occasional gusts of wind. To our left, a concrete building rises up, festooned with colourful signs of smiling cats, smiling women, cartoonish noodle bowls and line after line of Japanese script.

We are lost and in search of sake.

Our first full day in Tokyo had been an intense immersion into a thoroughly modern but very different world than we’d just flown in from. It was cleaner and more polite. It was also neon-bright and buzzing, pulsing with energy. It was exciting, but it felt incredibly foreign.

To our right, a gaggle of umbrellas bobs across the road. A green lighted man sets the pace with the repetitive song of a robotic cuckoo bird. I try to whistle along and almost get it. It’s weird and I love it.

Neesh holds her phone out in front of her in an effort to get us back on track. I lean in to see what Google Maps is telling us.

The glowing blue dot is indecisive. It drifts on the map erratically, dragging it’s wide blue skirt like Cinderella after too much prosecco.

Google Maps, unfortunately, is telling us that we’re on our own.

Our goal is a sake bar named Moto, a tiny place for fifteen or so patrons, with a wide range of sake and well-regarded small dishes that pair well with Japan’s famous rice wine.

I look up to scan the list of signs for the fifth time, and this time, I see it. A small sign wedged between large coloured ramen signs. They’ve used English letters, Romaji. Moto. The sign indicates they’re down in the basement.

As we find our way downstairs, Neesh and I review our plans.

“Yep. And we have the call with that wedding photographer at 9pm.” She replies. It’s 4pm now.

“Right. We’ll aim to be back at the hotel for that?”

“We can probably do it on our phones if we need to.”

“True, but the Typhoon is coming in as well. Let’s see how it goes,” I say.

We arrive at Moto, greeted by glass bi-fold doors framed in dark wood. I look inside, and through the glass I see a dark wooden bar shaped in an asymmetrical U-shape, with two clusters of people inside. A group of three business men opposite the door face us, and a young couple sit at the button of the U, and they all have several small glasses of sake and little round plates of food.

And I don’t know how to open this door. It has no obvious handle. I don’t want to be a stupid westerner breaking glass doors, or barging in, so instead I’m swaying at the door like an idiot, looking up, down, left and right. I’m intensely uncomfortable, and my discomfort surges when I realise the patrons have stopped talking and eating to watch me sway at the glass.

I feel the urge to abandon ship, to run up the stairs and away, but then I’d have to explain myself to Neesh, and It’ll all get more embarrassing.

The stratagem works. One of the bartenders, a short, middle-aged Japanese man with round Lennon-style glasses, walks out from behind the bar and opens the door. It opens smoothly and my fears of breaking the door seem ridiculous.

“Irasshaimasen!” Our man with the glasses leads the familiar chorus and gestures for us to come in.

We are seated on tall stools just inside the door We sit up at the bar and look at the menu, which is almost in Japanese except for the words “Dry “ and “Sweet.”

I look up at the bartender and he reads my mind.

“No English menu. Sorry.“ He says. He sounds genuinely sorry. He looks down at the menu and I look down at the menu, too. Then he starts speaking again, brightly, as if he’s somehow cracked the code.

“We have Dry!” he points at the left column labeled Dry.

“And we have sweet.” he points to the middle column.

Then he points to the right column, taps his lips with his finger “Anno….” He scrunches his lips, as if trying to summon the right word. He turns to a colleague and speaks in Japanese. He receives a reply, then turns back to us.

Neesh and I look at each other. We’re still lost and don’t know how this works, but at least we’re dry and inside, and they definitely have booze here.

Neesh notices the small-print of the menu: a tasting menu. Perfect.

“Can we try the tasting menu?” She says to the bartender.

He fishes six huge bottles of Sake out of a large fridge filled with huge bottles. He pours us a tea cup of each. He forges ahead, speaking to us in Japanese. I imagine he’s saying things about the mouthfeel of the sake, the bouquet, the body. It is lost on us. Finally he finishes and indicates the cup, each one in turn: “Sweet,” he moves his hand to his left, “mix”, and again, “dry.”

Behind the bar there’s a small yet busy kitchen. Now that we have our drinks, they pass out two small bowls of brown mushy looking stuff that smells delicious. The bartender tells us in Japanese what it is. We’re clueless. We smile and nod our encouragement. We appreciate his effort.

Across the room, two businessmen speak up to help. Their faces are blushing from the Sake, jump in to help.

“Rice. Miso,” they make squeezing motions with their hands, “squeeze,” we are watching with wide eyes, and smiling. They look like they’re milking a cow. It’s hard not to chuckle. They look down at their hands, and before long the room is laughing together.

To our right, in clear, mildly accented English, the woman to our right speaks up. “It’s like a rice stew cooked with miso and sake. You drink it. It’s nice.”

We turn to her, grateful for the explanation and surprised at her clarity.

“Thank you! It smells great.” We lift the cups to our lips and taste it, savouring the miso and sake flavour. The texture is like a thick congee, slightly gelatinous. Strange, but tasty.

Our friendly translator smiles, amused at whatever expressions inhabit our faces as we taste the stew. She’s dressed in a dark blue dress with a round neck and mid-length sleeves. Her drinking partner stands between Neesh and the woman wearing a plain white tee. When we look in his direction, he bobs his head and smiles.

“Where are you from?” She asks.

I usually find this question hard to answer both correctly and succinctly. I decide to keep it simple. “London. We arrived yesterday.”

“Where are you from?” Neesh asks.

“Oh we live around here in Shinjuku. This is our favourite bar.”

Neesh and I look at each other and smile. Our efforts to find the place have been validated by locals.

“Good job finding this one, Neesh.” I ask.

“Yes, ah,” our new friend pauses, bringing a finger to her lips, thinking. “How did you find this place?”

“It’s on the internet,” Neesh replies, then adds ”on Timeout Japan.”

“Oh,” they nod, but their faces look confused. They clearly don’t read Timeout.

“Why are you here today? Celebrating? On holiday?” Neesh asks them.

“We,” she pauses and looks at her partner,”well, we just get married — ”

“– wow!“ Neesh and I exclaim in unison, and give them a little clap. The men across from us are unabashedly listening in. They also clap.

“Not real wedding,” she says, then briefly converses with her apparent husband. “Not sure what to say, it was the legal wedding, just the government thing. Real wedding in November.”

We both nod. Registry wedding.

“We are getting married next year in June. We also need to go to the wedding registry to do this, but in London.”

I look down and notice we are at the end of our sake, and so are they.

“Sumimasen!” I say to the barman. excuse me!

He pours us all drinks.

The business men clap as we hold our cups up. We all drink. The Sake tastes good.

“Where are you going on your honeymoon?” Neesha asks.

“We haven’t decided yet,” she says, looking at her partner, her eyes large and faux-pleading “but I want to go to Hawaii.”

He laughs as looks at her expression says “She looks at me like that. I want to go to Tel Aviv.”

I hold out two hands as if presenting two options. “I like both!”

He looks at his new wife and says, “See?”

I get the feeling like this conversation has happened many times before, in their house, probably over messages and emails, with friends, in bars and restaurants around Tokyo.

It occurs to me that Neesha and I have had different versions of similar conversations many times before, over messages and emails, with friends, in bars and restaurants in London and San Francisco.

“Either way, whatever happens” I say to them, paraphrasing something Neesh and say to each other when we have similar conversations, “it’s going to be a lot of fun. Congratulations again!” I lift up my cup. “Kanpai!” Cheers!

This site uses Akismet to reduce spam. Learn how your comment data is processed.